Bringing a cooler to a day at the beach or a picnic by the lake is part of what makes a summer day out so magical. You’re away from your kitchen and your fridge, but you can still enjoy frosty-cold drinks, ice cream and other chilled food at leisure. One drawback of a traditional cooler, however, is that it relies on ice, which inevitably leaves everything in the cooler wet, soggy and miserable! On top of that, the cooler is heavy and its contents harder to find.

The problems of ice are solved by this innovative cooler, the GoSun Chillest. It’s a solar-powered cooler box that can use its own battery and the power of the Sun’s rays to keep its contents chilled, and do so without using any ice. It can keep contents cool for up to 10 hours, and is built with two cooling zones for chilled or frozen goods.

Its total capacity is 45 liters, meaning you can bring plenty of snacks and drinks (about 60 beer cans in total) for just about any outdoor event. Better yet, it’s constructed with the user on the go in mind. The GoSun Chillest features a built-in battery with 10 hours of life, extendable to 30 hours with the external battery. It has all-terrain wheels with a simple telescopic handle to pull along.

Ice is messy, it’s heavy and it takes up valuable real estate in the cooler. With GoSun Chillest, you’ll never have to worry about packing ice in the cooler again.

The dual zones have their own temperature controls, which you can operate right from the cooler unit buttons, or from your connected smartphone app. How is the GoSun Chillest able to get to these temperatures in the way it does? It uses an all-electric brushless DC compressor instead of a less-efficient thermo-electric cooler. The compressor only uses 45 watts of power to get the job done, which is far less than other cooler brands and household appliances.

You can use the separate elbow solar table to supplement the power over 5 hours with a steady 25-watt energy supply. You can also plug it into your car via a 12-volt or AC adapter. The solar charger panel also doubles as a table with a cutting board housed in the lid so you can cut up fruit for drink or prep food for the barbecue. Whatever you need!

The GoSun Chillest is an evolution of the company’s first-generation cooler based on customer feedback on the first Indiegogo crowdfunding round. New additions include:

GoSun’s latest Indiegogo campaign for the Chillest is still active and those who pledge to the campaign can enjoy rewards and get a discounted price on the unit. Orders are being taken now, and deliveries are expected to start in July 2021. 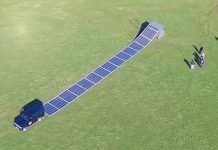 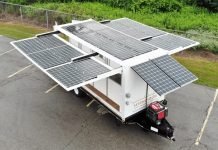 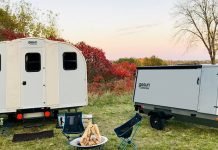 GoSun Camp365: Solar-powered camper trailer that pops up in under 10 minutes 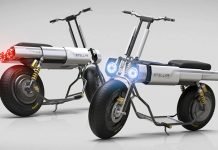