Humans’ race to space has been going on for almost 100 years and in 2022, we’re still going. However, there are even more players in the race. Not only are government organizations traveling to space, but with each coming year, more and more private companies are coming up with their own methods to reach space. One of those companies, SpinLaunch, will catapult 200kg/440lb class satellites into low earth orbit while adding zero emissions to the most vital layers of our atmosphere – here’s how it works!

The Journey to Space

With people being able to access space more frequently, SpinLaunch takes into consideration that “…structures, equipment, and supplies required to support in-space civilization must also be launched.” So how do they do it? Their vacuum chamber allows for a low pressure environment that enables their self-named “hypersonic tether” to spin at nearly 5,000 mph, nearly 6x the speed of sound – with minimal heating and drag.

When standing upright, SpinLaunch’s Suborbital Accelerator is taller than New York’s Statue of Liberty, which is 305 feet or around 93 meters. Its vacuum chamber is made from a high quality steel in the shape of a cylinder, and is about 300 feet or roughly 91 meters in diameter. SpinLaunch hasn’t always been possible, however, with the development of low-cost modern carbon fiber as well as small-scale electronics, SpinLaunch is able to fly high with ease.

SpinLaunch’s tether is made with this high-strength modern carbon fiber to withstand high-g environments. Additionally, SpinLaunch’s ultra-high-speed airlock doors operate faster than the blink of an eye. The airlock doors are there to help prevent the vacuum chamber from re-pressurizing after the launch vehicle is released into space.

Sustainability in the Stars

Space travel is always going to have a pretty hefty price tag, but this isn’t sustainable for a regular private company. Because of this, engineers at SpinLaunch developed low-cost satellites that are capable of  both surviving and still working efficiently after going through kinetic launches at high speeds.

SpinLaunch is developed to skillfully launch large numbers of satellites all at once, and the satellites launched can weigh up to around 440 pounds or 200 kilograms. The velocity boost provided by the accelerator’s electric drive results in a 4 times reduction to the fuel required to reach orbit, a 10 times reduction in cost, and the ability to launch multiple times per day.

According to SpinLaunch’s official website, their first customer launches are planned for late 2025. The company’s first Orbital Launch Site is currently still undisclosed, however, they are in final selection processes on when and where to do it. 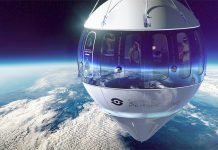