It’s no secret that beaches around the world are riddled with trash. If humans can’t be relied on to pick up after themselves, then maybe it’s time to bring in the help of robots. The company 4Ocean teamed up with Poralu Marine to create the BeBot–a remote control robot designed to suck up trash and leave beach shores spick and span.

4Ocean hopes that with the help of its machine polluted ecosystems will have a fighting chance to survive and thrive once again.

4Ocean and Poralu Marine designed the BeBot with the ability to clean 3,000 m2 of beach in just one hour. The beach cleaning robot can collect trash and tiny plastics 10cm under the sand. A user can operate it through a controller up to 300 meters away. The once arduous task of a beach cleanup is now as easy as driving a toy car with the help of the robot.

The BeBot uses two electric batteries to run and a solar panel to prolong its charge and power accessories. Without relying on gasoline, the machine doesn’t emit harmful gasses or liquids that would counterintuitively harm the environment.

When the BeBot trash compartment is full, users can discard the waste in a designated location. However, the machine can’t decipher between different materials, so recyclables will need to be sorted out of the pile.

More than a trash collector

The BeBot is separated into two parts: a mobile robot and a sifting mechanism that is pulled behind it. Users can detach the sifter and use the robot to pull trailers, jet skis, and other accessories. 4Ocean and Poralu Marine also offer different rig attachments designed to remove algae, seaweed, and level sand.

Seeing plastic pollution along a beach is becoming as common as seashells. All that trash is winding up in the bellies of animals like seabirds and sea turtles, causing premature deaths and unnatural diseases. When onshore trash threatens the existence of one species of animal, it puts the entire ecosystem at risk of collapsing. Without intervention, beach pollution could quickly become one of the greatest threats to the environment.

To solve this problem, countries and organizations have tried using volunteers and machinery, such as intrusive tractors that do more harm to the environment than good. The BeBot, on the other hand, is an efficient solution that prevents the need for laborers and gets the job done without leaving a carbon footprint.

Who’s the BeBot for, and availability

The beach cleaning robot isn’t intended for personal use–although it appears the machine is available to everyone. Instead, the company suggests that the BeBot would be a great cleanup tool for hotels, municipalities, nature organizations, golf courses, or people interested in starting a local cleanup group.

4Ocean doesn’t provide any price or availability details on its website. However, the company prompts anyone interested in acquiring a BeBot or bringing one to a beach to submit an inquiry on its website. An equipment specialist from Poralu Marine will respond with all the necessary information. 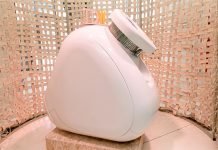