Digital scanners have greatly evolved over the years. The devices we see today are less bulky, lighter, and boast a much faster scanning speed than those that were around in the 90s. However, there isn’t a marked difference in the basic technology of these scanners. Most of the scanners around are flatbed scanners and most of them have been unable to completely overcome problems such as slow scanning speeds and sub-optimal clarity. The CZUR Aura Smart Scanner is a radical shift from the norm. It embraces a new scanning technology and employs AI features to give you the smoothest scanning experience.

The design of the CZUR Aura scanner is striking, to say the least. Unlike conventional scanners, it stands upright while employing a 20MP HD camera to take snapshots of whatever you are scanning. This chic design and the foldable technology ensures it occupies much less space when compared with conventional scanners. The scanner is controlled with the aid of a dial button at the base and there are indicator lights that tell you the mode you’re in.

The 20MP camera is powered by Panasonic. You would naturally expect crystal clear images of whatever you put on the scanning mat. About three lasers are under the camera unit. The lasers work together to ensure scanned books do not reflect the curves that are normally present on paperbacks. This is one of the major shortcomings of previous scanners as you would need to unbind the books before you can scan them properly. The scanner also has a foot pedal that enables you to scan with a single press and sidelights that function to reduce the glare on glossy materials. These do not come pre-installed with the scanner. You’ll have to install them yourself.

The upright design of the CZUR Aura enables it to function as a desk lamp. You can tune the low energy but brilliant light to four varying intensities depending on the condition of use. Back to its primary function, the CZUR Aura scanner is capable of scanning just about anything. Books, pictures, toys, artworks, and just about anything can be digitized with the aura scanner. Moreover, with its 2 seconds per page scanning speed, it makes light work of a traditionally tedious process. The camera’s OCR supports 187 languages. Converting your paperbacks into a Word Document or PDF file has never been easier.

You’ll need to install the CZUR scanning software before you can use the CZUR Aura as a scanner. If you want to scan anything, simply place what you’re about to scan on the scanning mat and instruct the scanner to do its work. There is a mobile app that controls the camera. Alternatively, you can make use of the foot pedal. You’ll have to tell the camera what you’re scanning especially when dealing with books if you are to get the best results.

If you are already thinking about getting this wonderful product, you’re not the only one. The scanner is currently at the crowdfunding stage and the campaign on Indiegogo is already more than 1000% past its target. You can still check out the page for pledges and rewards. The rewards would be delivered by December 2018. It is expected that the scanner would be available for purchase around that period. 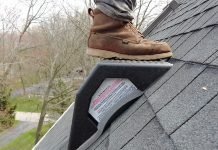 Pitch Hopper Roof Wedge: An essential tool for any roofer or crew

Steer wearable device will not let you fall asleep at the...