Statistics from the US Federal Bureau of Investigation reveal that an estimated 1.5 million bikes are stolen in the United States every year. This shows an upward trend in the number of bike theft cases, despite the general decline in property theft. The reasonable conclusion is that bike manufacturers are not paying enough attention to the security of their products.

For a fact, most of the devices that are aimed at enhancing bike security come as independently manufactured attachments (U-locks are the most popular). Often, bikers feel reluctant to spend extra on such devices. And in other cases, the devices aren’t exactly convenient to use. The Yerka V3 is the world’s first theft-proof bike with integrated anti-theft lock. It gives you all the assurance you need to park your bike anywhere convenient.

Yerka features an easy-to-use integrated locking technology that allows you to lock your bike within 15 seconds. You can lock your bike to poles, fences, bike parking or just about any structure that is up to 20cm wide. With the Yerka V3, you can do away with heavy U-locks or expensive GPS trackers without jeopardizing the safety of your bike. According to the manufacturers, there has been no single reported case of bike theft where the Yerka technology is being used.

Yerka V3’s wheels have special anti-theft nuts that only the bike owner can remove. As long as you do not misplace your key, you can park your bike, safe in the knowledge that you’ll meet it right where you left it, with all the parts intact.

In addition to its security features, the Yerka V3 comes with Reflective tires that ensure you never go unnoticed, even in the darkest streets. When riding in the dark, the bike’s sidewall reflects brightly, such that you’ll be clearly visible to other road users. You’ve never been safer riding a bike at night.

Shimano Nexus gears are a favorite among many bikers because they are a fine blend of functionality and convenience. The Yerka V3 is equipped with these beauties. Unlike traditional bikes where the gears are visible on the back wheel, Shimano Nexus gears are incorporated inside the hub, resulting in low maintenance and greater reliability. What’s more? You can switch to any of the 3 gear speeds available without pedaling. This makes riding the Yerka V3 on any terrain easy as pie.

The Yerka Y3 is significantly lighter than a traditional bike. In the event that you need to transport the bike, you can lift it without over-straining your muscles. The U-lock technology that comes with the bike also means you do not need to carry extra weight around.

Yerka V3 theft-proof bike is available for order on the Yerka official website. The bike currently sells for around €599 – €749 (VAT inclusive). 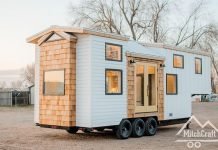 Fridge Eye – Turn Your Fridge into a Smart Fridge