The electric car has been steadily gaining ground in the hearts and minds of drivers everywhere. However, the electric motorcycle is still somewhat lagging behind. UK-based company White Motorcycle Concepts (WMC) has embarked upon a project that will boost the profile of the electric motorcycle as an idea. Moreover, it intends to claim the land speed record for electric semi streamliner motorcycles.

The fruit of their labor has now emerged: the WMC250EV.

The WMC250EV is a 2WD, hydraulically hub-steered electric motorcycle. It looks so unique because of the rather distinct design feature that dominates the vehicle — there’s a giant hole all the way through it.

No, the bike wasn’t shot through by a giant cartoon cannon. It has been purposefully designed this way using a new patented technology that they refer to as V-Air. The “hole” as the layman passer-by would call it is actually the VDuct and it’s lined with carbon in a design that reminds one of a Venturi tunnel.

This is unique not just because of the way it looks but because nothing this audacious has ever been tried on a motorcycle before. The plan for this concept is first to bring the technology and design to its peak and then defeat two records. In 2021, they will make an attempt for the British electric bike land speed record, and in 2022 they will attempt to break the world record.

The world record attempt will take place on the Bolivian salt flats in 2022. Their target speed is a very humbling 250mph or 402km/h, which will defeat the current holder of the record, Max Biaggi riding the Voxan Wattman. For WMC founder and CEO, Mark White, the speed record is the only way to truly prove that what they have created isn’t just new or interesting, but revolutionary.

As we touched on above, the key innovation on the WMC250EV is its V-Air technology, with that carbon duct as its centerpiece. According to WMC, the concept is able to reduce drag by as much as 69 percent compared to what they describe simply as “the world leading motorcycle.” Its drag coefficient is just 0.118, which even beats out the current world’s fastest production car, the SSC Tuatara, the drag coefficient for which is 0.279.

The V-Air technology is patent-granted in the United Kingdom, with patents pending in the United States, Europe and Japan. WMC points out that it might be the single biggest innovation in the world of motorcycles since the motorbike’s invention and first development back in 1894. In their current state, motorcycles are using nearly all their energy to overcome aerodynamic drag, and that’s the unique problem that V-Air solves.

Further enhancing the aerodynamic effect is a unique riding position that sees the rider sitting forward in a horizontal crouch behind the curved windshield, which also lets the air freely flow over it for even further drag reduction.

The VDuct is an idea that WMC founder and CEO, Mark White, hopes can eventually be developed into a production concept that can be applied to other electric bikes as a way to increase their mass-market appeal. If you can’t get the engine noise, you can at least get a down-force and aerodynamics that no internal-combustion motorcycle could hope to match.

As fantastical and interesting as the V-Air technology and its carbon air duct are, they didn’t come to fruition without first overcoming some serious obstacles. The main one was what to do with all the bike innards. Beyond that, there was the question of how the bike would be steered and controlled since the VDuct cuts right across the space where you’d normally place the motorcycle’s steering head and suspension forks.

The solution White and his team at WMC came up with was the creation of a double-swingarm suspension system, with each wheel connected to a unique kind of system. The rear wheel is still driven by a chain, but also has two 30kW electric motors integrated into the swing arms that push it along. The front wheel uses a special hydraulic system, which eliminates the need for any kind of mechanical linkage. The front wheel also has a pair of 20kW motors, which brings us to the next big innovation on the WMC250EV.

The WMC250EV does everything with two wheels. The electric motors on both wheels create a real 2WD electric drivetrain system, and also a two-wheel regenerative braking system. With all motors able to fly into a reverse mode to collect kinetic energy and feed it in the battery, the WMC250EV is in possession of serious potential as a viable long-range electric motorcycle concept in the future. In fact, White believes that this technology could effectively double the range of current electric motorcycles.

Other features of the WMC250EV

The bike will house a fairly straightforward 15kWh battery pack and have a peak output of 134hp. That may seem surprising to anyone familiar with Biaggi’s record-breaking performance on the Voxan Wattman. The Wattman boasted an incredible 362hp and has broken many records. WMC’s Mark White contends and maintains, however, that the unbeatable aerodynamism of his creation will compensate for the disparity in horsepower.

This particular model has also been especially shaped and designed for its intended rider, Mark White, and so it is molded with unbelievable precision to his own shape and form, but more importantly to make White a part of the overall structure. In doing so, the WMC team were able to continue their incremental improvements of the aerodynamic features of this bike.

What could the WMC250EV mean for electric motorcycles?

WMC is singularly focused on their initial goal of using the V-Drive-powered WMC250EV to defeat the world land speed record in the “Motorcycle Electric Semi Streamliner” category. After that, however, their meticulous research and development will undoubtedly yield amazing technological fruit that could benefit the future market growth of the electric motorcycle sector.

It may be limited right now by range and public perception, but with this kind of exciting innovation on hand to turn an electric motorcycle into something as efficient and range-capable as an electric car might just be the game-changer that the industry needs. 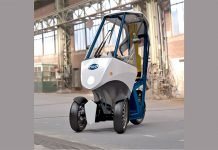 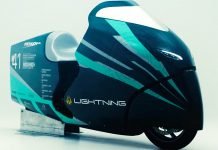