In the world of canine games, there’s perhaps nothing quite as dynamic and unique as the SwiftPaws system. SwiftPaws was originally designed back in 2012 as professional-grade lure course equipment. The idea is a remote controlled “lure,” which for SwiftPaws is a flag tethered to a line, that can be moved back and forth around a circuit and pursued by the dog. They call it “Capture the Flag for Dogs.”

It’s a simple idea that in 2018 became SwiftPaws Home, a smaller and scaled-down version of the equipment that people could use in their backyard. In 2021 it has evolved further to become SwiftPaws Home Plus; smaller than the earliest professional-grade equipment, but larger than the regular SwiftPaws Home system, let’s see below what makes this so special.

Statistics show that more than half of dogs in the US are overweight, which means many of them are lacking the kinds of physical and mental exercise they need on a daily basis. There are many breeds of dogs that are especially energetic and benefit in multiple ways from a truly rigorous workout (or two) each day. The SwiftPaws system aims to solve that.

The 2018 SwiftPaws Home system contained just the main hub and 3 pulleys to move the flag in courses up to 300 feet. It is small enough and affordable enough to fit into just about anyone’s backyard. The Home Plus system takes it to a bigger scale, offering the main hub and 5 pulleys and allowing users to create courses up to 750 feet. This offers a solution to those with bigger yards, as well as to boarding kennels and other professional outlets who need to exercise clients’ dogs more effectively.

Users can move the flag lure up to 36mph, which is fast enough to really get the dog moving and shedding the energy and calories that they need to keep the weight off.

Mindful of Canine Health and Safety

SwiftPaws Home Plus creates individual play sessions of 90 seconds each. When you and your dog have been playing for 80 seconds, you will be prompted by a vibration and light that the session is coming to an end and to take a rest.

If your dog manages to grab the flag, or if they step on the line, SwiftPaws Home Plus will detect the disturbance and trigger a safety stall. The system also comes with secure tethers to keep your course both secure and flexible enough to last through the rough and tumble of multiple sessions.

The exterior of the machine is also built with extra-durable materials to prevent your pup from being able to dig into the pulleys when they are just really determined to capture that flag! 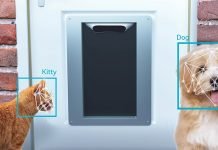 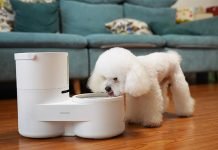