As electrification starts to penetrate more and more areas of transport and even sporting technology, the company E1 has developed what they believe is a pioneering craft in what could become a new era in electric water sport racing. Their creation is known simply as “RaceBird” and includes both cooling and hydrofoil technology wrapped up in a sleek and cutting-edge design.

You might be forgiven for thinking that the RaceBird was a car when looking only at the cockpit. It is designed and built just like a single-seat car cockpit, complete with steering wheel and pedals. The founder of E1, Alejandro Agag, has a background in GP2 (the main support series of Formula 1) and thus has a deep knowledge of the sport and its dynamics.

Over the cockpit is a protective enclosed canopy designed to protect the driver as the RaceBird uses its hydrofoil ingenuity to actually lift out of the water to boost both aerodynamics and energy efficiency. Using its 35-kWh electric powertrain built by Kreisel Electric, RaceBird can reach speeds of 50 knots (about 58-mph), outputting a total power rating of 150-kW (about 200-bhp).

The electric systems power a pure-electric outboard motor manufactured by Mercury Racing. The battery itself is placed behind the pilot cockpit. The two other key components to its potential racing viability are its hydrofoils and cooling technology.

The hydrofoils sit under the cockpit, and as the motor powers up, the boat lifts onto the foils and out of the water for minimal drag and maximum power conservation. The battery features innovative immersion cooling technology which effectively prevents overheating, a common fear in the realm of all electric vehicle engineering.

The RaceBird boat isn’t just a concept or an on-paper idea, it’s a real boat that has already started real-world testing. The first time the boat ran was on the River Po in Northern Italy. Testing the prototype was none other than Luca Ferrari himself, a former powerboat champion. The main point of the first test was to check overall viability, in particular of the electrical components when running RaceBird at high-performance levels.

In the coming weeks, RaceBird is scheduled to complete further testing, including straight-line tests, racing simulations, and more. Important to the creators at this stage is to gather as much data as possible, especially so that they can monitor the foiling and handling dynamics of the boat, which of course are among the most critical aspects for any future viable racing event.

If RaceBird and the sport of electric power boat/hydrofoil racing is to become a reality, then customization is important. Teams and individual racers need to distinguish their craft, after all. Even now in its testing stages, E1’s RaceBird is fully customizable, with 5 different exterior color choices and combinations.

With testing set to continue, it might not be as long as you think before RaceBird is an on-water reality that simply cannot be ignored! 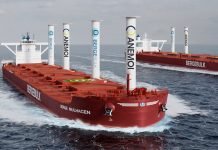 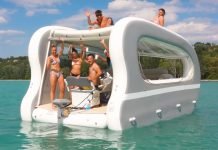 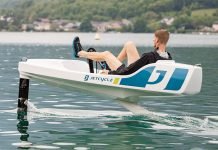 Jetcycle hydrofoil: The recumbent bike that soars over water 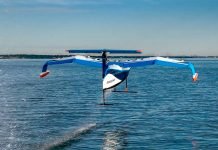