The world’s population has officially hit the 8 billion mark, and it keeps growing. With Earth’s population getting bigger and bigger, one of the greatest problems for human beings is a lack of space. It’s becoming increasingly harder to get around in cars in areas with high population.

Increasing ease of mobility in urban areas is a difficult problem to address and try to solve, let alone developing a solution that is both sustainable and Earth-friendly. Fortunately, a new compact vehicle named the Roo, is designed to do just that.

The birth and life of Roo

Roo has had a complicated history that began back in 2014. The Roo was originally a research project that was conceived in Switzerland at their University of Applied Sciences Winterthur. The original members for the project designed Roo as a solution to “creating a practical, cost-effective, visionary mobility solution for the year 2030.”

The possibility of turning this research project into a physical reality came about in 2016, and was founded as a spinoff version of the primary project. Then, in 2020, the Roo (then called BICAR), was granted permission by the Switzerland government to travel on roads. It was also classified by the government as an L2E vehicle, meaning an electric three wheeled vehicle with a maximum speed of 45 km/h.

Tilting technology and other features

The Roo is extremely lightweight due to its frame being made of pure aluminum. You can elegantly take tight turns at full throttle because Roo elegantly leans into the curve at up to 40°. Only 80cm wide, a Light Electric Vehicle class L2e, Roo lets you drive down narrow lanes and around traffic jams, leaving other motorists behind.

The physical appearance of the vehicle exudes sleekness and simplicity. The vehicle is compact with a single seat and three wheels. It has a windshield that protects drivers from inadequate weather. Instead of a steering wheel typical of cars, it features a handlebar. The Roo currently only has one color scheme: white, yellow, and blue.

Roo is a sensible expansion to any company fleet. Medium and large companies headquartered in urban and suburban areas have a particular need for small, agile vehicles that employees or clients can use to travel between plants and subsidiaries or into the city. The three-wheeled electric Roo also represents the perfect solution for driving across a large corporate campus or inside a sprawling industrial park to make meetings or head to lunch.

Roo works as an alternative to e-scooters, e-bikes and cars for existing sharing platforms. It complements public transportation and can also help cover the most problematic leg of it: the first / last mile to and from work.

If you own a second car or a motorcycle, Roo can substitute for it. Use it for short hops around town and save your car or SUV for longer trips or to haul passengers or cargo. This will conserve on gas, cut emissions and keep miles off your primary vehicle. Plus Roo is much easier to maneuver and park due to its small size.

A friend to the Earth

One of the major desired features for the Roo was for it to be sustainable and environmentally friendly. It’s a climate-neutral vehicle, and it achieves this through the use of multiple features.

Solar powered: The Roo has a solar panel located on the roof of the vehicle. When in optimal, sunny conditions, the compact vehicle can recharge itself during the daylight hours.

Electric: Roo is easy to charge and is simple and quick charging. Once connected to a power supply, it will be able to recharge completely within 2 to 4 hours.

Battery powered: According to Roo’s official website, the vehicle has a battery capacity of 3.7 kWh and can cover approximately 60 km before needing to be charged again. Additionally, the batteries are easy to remove from the vehicle, so that they can be charged inside the home, office, etc.

We reported earlier on the BICAR, which was priced at 7,000 Swiss Francs (CHF) – approx. US$7,426. No pricing information is mentioned for the Roo on their official website. There is a contact form on the website to register your interest in purchasing the vehicle. 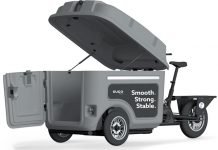 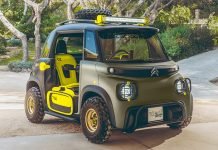 CityQ car-eBike combines the comfort of a car and benefits of...

Scoozy, the alternative to the mobility scooter, is smart, safe and...