Insta360 have created a new unit to add to the already-popular One RS modular actioncam system they previously launched. It’s called the 1-Inch 360 Edition, and is the company’s first 360-degree camera unit that they have co-developed with industry legends, Leica.

Capable of shooting immersive 6K video even in low light, the 1-Inch 360 Edition has already been hailed as a huge step forward in making the One RS system the most comprehensive and versatile unit available anywhere.

The 1-Inch 360 Edition features an exhaustive list of impressive advanced technology. First of all, it includes dual 1-inch-type CMOS image sensors paired with dual-lens 360-degree optics. This hardware allows the camera to capture 360-degree stills of up to 21 megapixels, as well as 6K all-around video footage, either for instant sharing, or to be edited using the Insta360 software.

It also features the “invisible selfie-stick” technology that removes the selfie-stick automatically from any immersive video footage and photos that are taken. This leaves content creators with amazing third-person views of their dynamic action, leaving viewers to wonder: “Wow, how did they do that?!”

It even makes use of AI-powered technology in its PureShot HDR mode that delivers superb auto exposure bracketing to massively enhance photos all without users having to do a thing. Action footage is further enhanced with industry-leading stabilization features from FlowState. Insta360 is saying that you’ll be able to leave the gimbal at home!

Bright or dim; rain or snow – it’s ready to go

Working with Leica, Insta360 has done everything to make this new addition to the One RS system as valuable as possible. One way they’ve done that is by including class-leading low-light capabilities in the unit to ensure that image quality never suffers regardless of light conditions.

On top of that, the unit is also IPX3-rated for protection against the elements, including rain and snow. The One RS lenses are easily interchangeable at the head of the unit, allowing users to switch the portable lenses as required, giving them every bit of equipment they need to create top-quality content on the go, wherever they are.

This is all part of making the One RS concept a one-stop shop for the most ambitious and original content creators, allowing them to create more elaborate and unique footage and images with less.

The 1-Inch 360 Edition of the Insta360 One RS, co-engineered with Leica, is available now in three different versions, which we’ll detail below.

The standard Standalone pack includes a One RS Core, with a 1-Inch 360 lens unit, as well as a mounting bracket, vertical battery case, and lens cap. The Get Set Kit adds a selfie stick and a 64-GB MicroSD card, and the Virtual Tour Kit adds an all-purpose tripod on top of that.

Packaged together with Insta360 Care damage protection, and an extended warranty, the total package starts at $957.99. Both the care package and warranty are optional, however. Have a look at the video below to learn more. 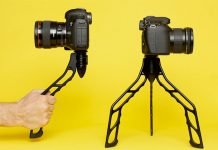 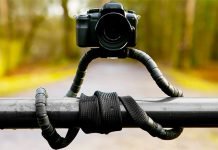 Conda strap: From camera strap to tripod with the flip of a switch

Conda strap: From camera strap to tripod with the flip of...